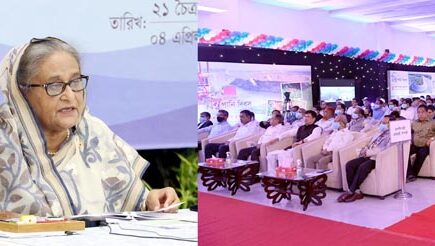 “We’re giving emphasis on nature based solutions in the development philosophy. We’ve to find out the nature based strategy for proper management of the water resources,” she said.

She said this while addressing a function at Pani Bhaban in city’s Green Road area as the chief guest organised by the Water Resources Ministry, marking the World Water Day-2022.

The prime minister joined the function virtually from her official Ganabhaban residence here.

She asked all concerned to keep two things in mind –harvesting rainwater and building water conservators — while taking any development plan.

“We have to focus on harvesting rainwater and its conservation in ground,” she said.

The prime minister also asked all concerned to open connecting points of rivers with canals, haors and baors, saying otherwise the navigability of the rivers would be damaged.

She said all these things will have to be taken into consideration while adopting development plans.

An audio-visual song on the World Water Day was played while a documentary on Bangladesh’s water resources management was also screened at the function.

The World Water Day is held annually on March 22 as a means of focusing attention on the importance of freshwater and advocating for the sustainable management of freshwater resources.

The United Nations General Assembly adopted the resolution by which March 22 of each year was declared World Day for Water, to be observed starting in 1993, in conformity with the recommendations of the United Nations Conference on Environment and Development (UNCED) contained in Chapter 18 (Fresh Water Resources) of Agenda 21, reports BSS.