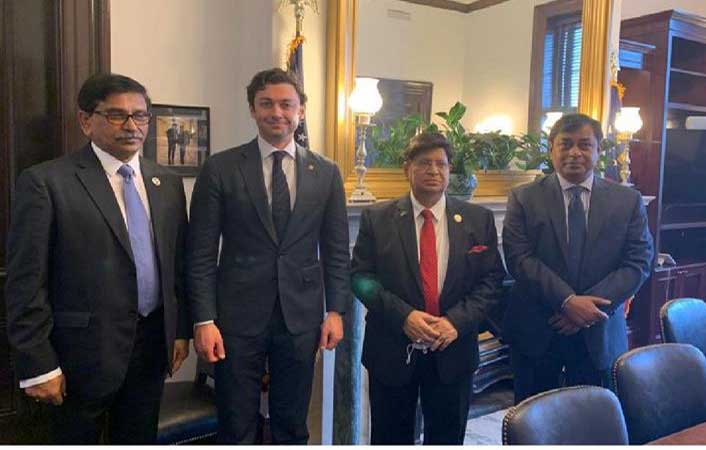 Foreign Minister Dr A K Abdul Momen has sought support of US lawmakers to extradite Rashed Chowdhury, the self-confessed convicted killer of Father of the Nation Bangabandhu Sheikh Mujibur Rahman, who is now residing in the US.

He placed his request while holding separate meeting with democrat Senator Jon Ossoff and Congressman Ami Bera, the Chairman of the House, Foreign Affairs Subcommittee on Asia, the Pacific, Central Asia, and Nonproliferation in Washington Dc, reports BSS.

The meetings took place on Wednesday during his ongoing visit to US on an invitation from the US Secretary of State Antony J Blinken, at the respective offices of the Senator and the Congressman in the US Capital, a foreign ministry press release said here today.

Dr Momen also sought the US lawmakers’ support on lifting of the US sanctions on RAB and said Dhaka expects that the sanctions would be withdrawn soon.

During the meeting, the foreign minister thankfully acknowledged the strong US humanitarian and political support to Bangladesh in dealing with the 1.1 million Rohingya forcibly displaced to Bangladesh by Myanmar.

He requested the US lawmakers to persuade Myanmar in all possible ways to create a safe and secure environment to take back all the forcibly displaced Myanmar nationals temporarily staying in Bangladesh to their homeland in Rakhine.

The US lawmakers commended Bangladesh’s generosity in hosting this huge number of Rohingyas and said that they would continue their efforts in this regard.

Dr Momen also briefed them on the impressive socio-economic development that has taken place in Bangladesh under the dynamic and visionary leadership of Prime Minister Sheikh Hasina, which was appreciated by the US lawmakers.

The foreign minister also called for increased trade and investment of the US in Bangladesh.

He also sought their support to revitalize the Congressional Bangladesh Caucus.

The foreign minister and the US lawmakers underscored the importance of further expanding the trade and investment relations between Bangladesh and the United States and deepening the excellent partnership in the coming days.

Mahbubul Alam Hanif, MP and Bangladesh ambassador to the US M Shahidul Islam were also present in the meetings, among others.