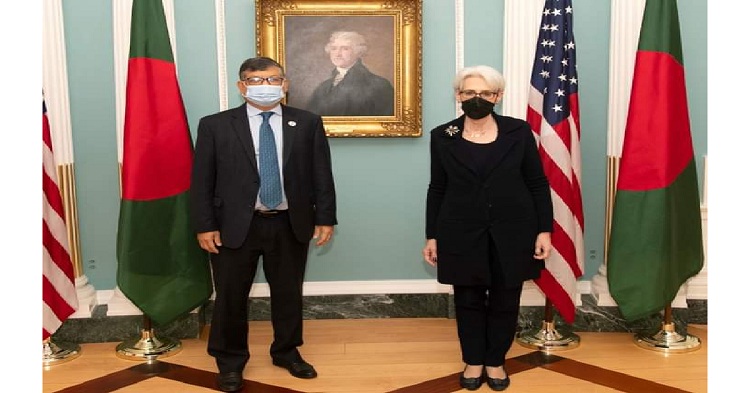 Bangladesh and the United States have discussed steps to promote security and prosperity in the Indo-Pacific.

Deputy Secretary of State Wendy Sherman had a meeting with Foreign Secretary Masud Bin Momen on Thursday and discussed bilateral economic, commercial and security collaboration, according to a message received in Dhaka, reports UNB.

Deputy Secretary Sherman emphasized the importance of protecting human rights, the rule of law, and freedom of expression, said US Department of State Spokesperson Ned Price on Friday.

Bangladesh and the United States celebrated the 50th anniversary of Bangladesh-US relations on April 4.

“Pleased to meet with Bangladesh Foreign Secretary Masud Bin Momen at the State Department to enhance our collaboration on bilateral and regional issues as we mark the 50th anniversary of the U.S.-Bangladesh relations,” Sherman tweeted after the meeting.

Foreign Minister AK Abdul Momen and his US counterpart Antony Blinken had a bilateral meeting at the US Department of State on April 4.