Dhaka calls for protecting oceans to save planet earth 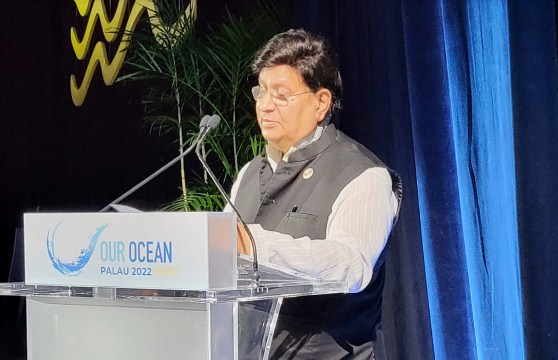 In order to achieve SDG 14, Bangladesh has announced five new commitments to the “7th Our Ocean Conference” in Palau.

“We must protect, preserve and promote our oceans and ecosystems to save planet earth,” said Foreign Minister AK Abdul Momen told the conference co-hosted by Palau and the United States on April 13-14.

The foreign minister referred to establishment of a new Marine Protected Area in Saint Martin’s Island reaching a total of 8.8% of its Exclusive Economic Zone.

He said steps aimed at ensuring safe ship recycling by 2023 have alao been taken.

He also mentioned the Solid Waste Management Rules 2021 as part of the commitments.

“We must not hesitate to break the mould. We must not be afraid to set a new trajectory for development of our oceans and seas for a better life,” he observed.

He said the nations must not constrain their ambitions, even if experience tells them that change is difficult. “It is in the face of such challenges that we must redouble our efforts and partnerships.”

Momen said US Presidential Special Envoy John Kerry could take a special jet from Guam to come to Palau, instead, in order not to pollute the world and to contribute less emissions, he came to Palau by a normal passenger flight.

“We are proud of such personal commitment; and if others follow, we can save the planet earth for our future generations,” he said.

“The ocean gives us life. We rely on it for food, livelihoods, climate resilience and recreation. To ensure the longevity of our planet’s life, decisive and collective action is required,” he said.

The Conference was a key moment for countries, civil society, and industry to commit to concrete and significant actions to protect the ocean.

Throughout the six previous conferences, participants had made more than 1,400 commitments worth approximately $91.4 billion and protected at least five million square miles of ocean, the conference was told.