President, PM greet countrymen on the occasion of Pahela Baishakh 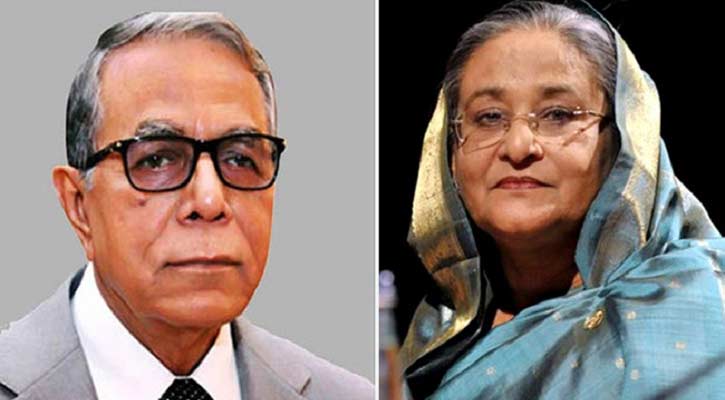 President Abdul Hamid, in his message, has wished all Bangladeshis living in the country and abroad a happy Bengali New Year.

The advent of Baishakh comes to people’s lives with ever new message, the head of the state said, adding that forgetting sorrow, decay and failure, everyone wakes up with great joy.

He said Pahela Baishakh is the main part of the eternal tradition of the Bengali nation.

The counting of the year, which started during the Mughal period as the crop year (Fasali shan), has become a commemorative festival imbued with non-communal spirit among all Bengalis over time.

To crack down on the non-communal spirit of the Bengali nation, in 1958 the Pakistani military government officially banned the practice of all people-oriented cultures, including the celebration of the Bengali New Year, he added.

Ignoring the government’s ban, the people of East Pakistan at that time forgot their religious and sectarian differences and joined the New Year celebrations, he said.

At that time, Pahela Baishakh was the main force in the development, self-control and liberation of Bengali culture, he continued.

With the rise of Bangladesh, this power of culture strengthened and accelerated the political spirit, Hamid said.

He said the traditional Mangal Shovajatra, a procession brought on the first day of Bengali New Year, got UNESCO recognition in 2016 as world heritage.

This international recognition of national culture is an absolute pride and dignity for Bengalis as a nation, he said, adding that one of the foundations of the philosophy and ideology of Father of the Nation Bangabandhu Sheikh Mujibur Rahman was the development of native culture and development of national spirit.

This consciousness was active in the Bengali New Year that Bangabandhu celebrated with his fellow prisoners while he was confined in prison, he said.

He urged all to build a happy and prosperous Bangladesh free from hunger and poverty by embracing this liberal spirit, Bangabandhu’s philosophy of state, the ideal of establishing Bangladesh and the flame of state-language spirit.

In her message, Prime Minister Sheikh Hasina said Pahela Baishakh is the day of harmony and the great reunion of Bengalis.

The premier called upon all, irrespective of religion and caste, to wake up with new joy forgetting the sorrows and failures of the past year.

Although the coronavirus infection has devastated the current world and the festival-loving Bengali nation had to celebrate the Pahela Baishakh being confined in their houses for the last two years, she said.

She hoped that the first Baishakh of this year will be celebrated again in a joyous atmosphere.

The search for the identity and roots of Bengalis can be found through its celebration, Hasina said, adding that Pahela Baishakh is a reflection of the Bengalis.

During the Pakistan period, the colonial power wanted to destroy the Bengali tradition, the premier said, adding that the Bengalis resisted it with the strength of self-identity and their own culture.

Bengalis joined the struggle for liberation by holding that power, she continued.

She said the combined flow of culture and politics has been turned into a struggle for independence and freedom, BBS reports.

“This is how independent sovereign Bangladesh emerged in the world,” she added.

Following this, the traditional Mangal Shovajatra has been recognized as world heritage by UNESCO, she said.

“The international recognition of it is undoubtedly a great achievement. Following this path, Bengalis will become the best nation in the world community,” Hasina said.

“Pahela Baishakh brings new ideas, a new dimension among us. We are fortunate for celebrating the birth centenary of the Father of the Nation or Mujib year and the golden jubilee of the country’s independence simultaneously through colorful programmes in 2020-2021,” she said.

This year is very significant in the people’s national life as a citizen of Bangladesh and Bengali nation as the country is celebrating the Diamond Jubilee of the great language movement, she said.

The Bengali nation cannot be suppressed as the achievements and progress of Bengali heroes will be remembered age after age, she said.

Ethnic heritage and pride are also the keys to the lifelong struggle of Bangabandhu Sheikh Mujibur Rahman in the ideology of secularism, liberalism, nationalism and democracy, the premier added.

She hoped that this year’s Baishakh will be a great inspiration for the nation to fight against militancy, fundamentalism, extremism and anti-liberation forces and to build a society free from hunger and poverty and a golden Bangladesh as dreamt by Bangabandhu.