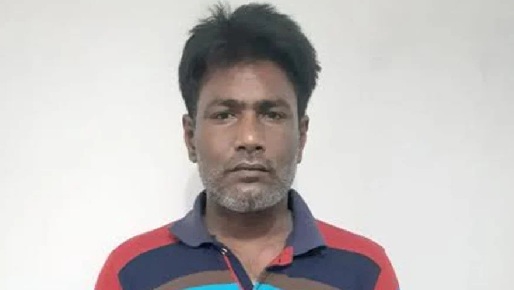 Driver of the Hanif Paribahan bus whose reckless driving led to Friday’s fatal accident in Rajshahi was arrested by police on Saturday.

Abdur Rahim was arrested from Mohendra bypass under Belpukur Police Station at about 2:00pm on charges of killing 17 people and injuring several others through reckless driving at Katakhali in Rajshahi.

He is the son of Fazlur Rahman of village Pirgacha under Puthia upazila.

Katakhali police filed a case against him on Friday night for killing 17 persons and injuring several others through reckless driving.

Motiar Rahman, officer-in-charge of Katakhali police station, said the arrested driver of Hanif Paribahan hit a microbus driving his bus recklessly on Friday, leaving 17 people on board the vehicle burnt alive and injuring several others.

The arrested driver was driving the Hanif Paribahan bus and collided with the microbus and a CNG-run auto-rickshaw, leaving 17 burnt alive on the spot. Only one passenger of the microbus survived.

According to the relatives of the deceased, members of five families were going to Rajshahi from Rangpur’s Pirganj by the microbus for attending a picnic.

Mokhlesur and Parvin’s son Pavel is now at the ICU of Rajshahi Medical College Hospital (RMCH).

On the other hand, the helper of the Hanif Paribahan’s bus is also undergoing treatment at the hospital.

The bodies of the deceased have been kept in the RMCH morgue and they will be handed over to their families after autopsy and DNA collection, according to the police.