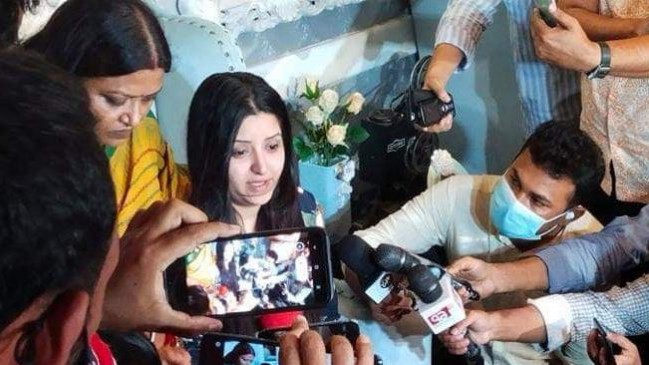 Detectives, in a drive, have arrested five people including businessman Nasir U Mahmud in an attempted rape and murder case filed by film actress Pori Moni.

Nasir, 50, is a former president of Uttara Club and a member of the executive committee of the Dhaka Boat Club, where the alleged assaults took pl ace.

Nasir alongwith the women were hiding in the house after filing of the case by Pori Moni, he added.

The three women were arrested for possessing liquor.

During the drive, foreign liquor and 1,000 yaba pills were recovered from the house.

Regarding Nasir, he said,”Nasir was an accused of several cases filed under Narcotics Control Act and Women and Children Repression Prevention Act.He has been expelled from Uttara Club on various charges. We’ll investigate the matter if anyone complain against him.”

Pori Moni, in her verified Facebook page, uploaded a status seeking justice from Prime Minister Sheikh Hasina, claiming that the six people attempted to rape and kill her.

The popular actress, whose real name is Shamsun Nahar Smriti, addressed the post to the Prime Minister, stating that she is seeking justice as a loyal citizen of the country.

“I’ve been physically assaulted and they even attempted to rape and kill me. I want justice. I’ve asked for help from so many people. However, they just listened to me and commented that they’ll ‘look into it’ while the fact is that no one has helped me yet,” Pori Moni stated in her post.

She has mentioned that she tried to contact the local police station and even IGP Benazir Ahmed, but she was yet to receive any formal help regarding her complaint.

“I haven’t found justice in the last three or four days. Where can I find justice? I’m a woman and actress, but first of all I’m a human being. I can’t remain silent over what happened to me today,” she added.

In her post, Pori Moni then addressed Prime Minister Sheikh Hasina as her “mother”, writing: “I was about 2 and a half years old when my mother died. Today, I need a mother more than anytime else. I’ve never seen you, accepting any injustice quietly. I need you; I need your help to stay alive. Please save me, mother.”

Pori Moni revealed the name and details of her assaulters via a press conference on Sunday night, at her residence in Gulshan in the capital.

The press conference took place after the actress surprised the nation through a status from her verified Facebook page on Sunday evening.

Bursting into tears at the press conference, Pori Moni described what exactly happened to her, sharing the graphic details of the incident and revealed who tried to rape her.

Sitting beside noted director Chayanika Chowdhury, Pori Moni said at the press conference that Nasir Uddin Mahmud, a businessman and currently appointed entertainment and cultural affairs secretary of Dhaka Boat Club, assaulted her at the club in Birulia, Uttara in the capital on Wednesday night.

The actress said that she went to the boat club with her costume designer Jimmy and Jimmy’s friend Omi for a professional meeting regarding a movie, where Nasir and another man offered them drinks at that time. She refused the offer stating that she was feeling unwell.

At one point, Nasir ganged up on her at the club and forced her to drink by putting the neck of a bottle into her mouth, beat her up and tried to rape her at the same time, Pori Moni said at the press briefing.

During the assault, Nasir addressed himself as a “friend” of Benazir Ahmed, Inspector General of Bangladesh Police and president of the Dhaka Boat Club.

The actress went on saying that when she was able to get out after two and a half hours, she went straight to the Banani Police Station but the officials refused to hear her words. She stated that she has also contacted Zayed Khan, general secretary of Film Artists Association, and other leaders of the film industry, however, did not get any legal or logistic support.