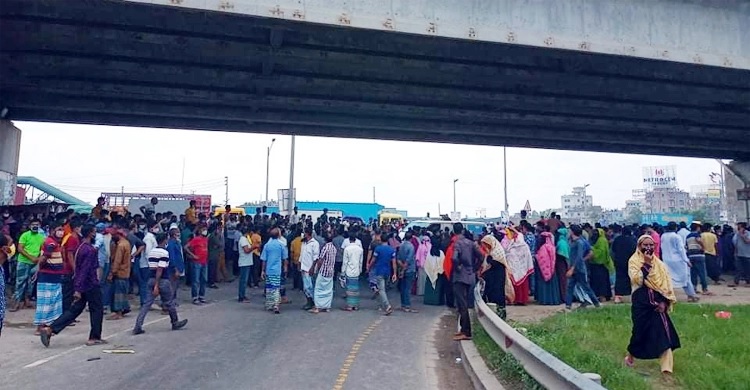 Workers of a ready-made garment factory have blockaded the Dhaka-Chattogram and Dhaka-Sylhet highways at Kanchpur under Sonargaon upazila in Narayanganj demanding three months’ arrears.

They blockaded the highways at about 9:00am on Thursday putting trucks, oick-up vans and electric poles. At that time, they chanted slogans in favour of their demands.

Several thousands of goods carrying vehicles and private cars were stranded on both the highways due to the blockades by wprkers of Sinha and Open Groups. As a result, acute congestion on the highways was created.

The movement of workers that began at about 9:00am was going on till writing this report at 4:00pm.

Workers have alleged that they agitated in the past demanding their outstanding arrears. Police administration gave them assurance of paying their arrears talking with the owner. But, nothing was yielded. They still await for three months’ arrears.

“The government has imposed a strict lockdown in the country. We are to pay room rents, for groceries, expenses of our families. Many of our families pass days almost without food everyday. There is nobody to look after us. Our movement will continue until our demands are met,” one of the workers said.

More from this section
Roads & Highways

Passengers suffer due to tailback on Bangabandhu Bridge