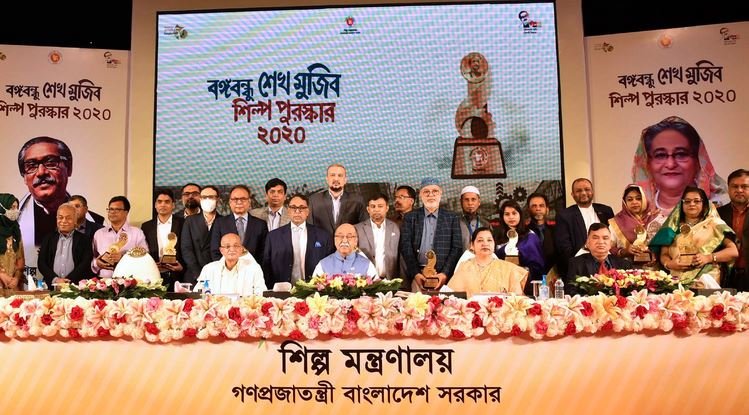 A total of 23 entrepreneurs and organizations of the industrial sector under seven categories today received the “Bangabandhu Sheikh Mujib Industrial Award 2020”.

Industries Minister Nurul Majid Mahmud Humayun handed over the awards to the representatives of the organizations at a function at the Osmani Memorial Auditorium in the city, BSS reports.

State Minister for Industries Kamal Ahmed Mojumder and president of the Federation of Bangladesh Chambers of Commerce and Industry (FBCCI) Md Jashim Uddin attended the function as special guests.

The Ministry of Industries has introduced the award for the first time marking the birth centenary of Father of the Nation Bangabandhu Sheikh Mujibur Rahman.

In his speech, Nurul Majid Mahmud Humayun said the Industries Ministry has introduced the award for the first time to recognize the contribution of industrial entrepreneurs and to encourage their creativity.

“We have introduced the award marking the birth centenary of Father of the Nation Bangabandhu Sheikh Mujibur Rahman. Deep respect and love for Bangabandhu has inspired us to take this initiative,” he added.

Zakia Sultana said the awards have been given to entrepreneurs and organisations to recognise their contribution to industry and to encourage creativity.

In the micro-industries category Karukola came in first, followed by Trim-Tex Bangladesh and Janata Engineering in second and third place respectively.

Ministry proposes names of 3 former secretaries for Evaly board