Driver, helper arrested over death of child falling from bus 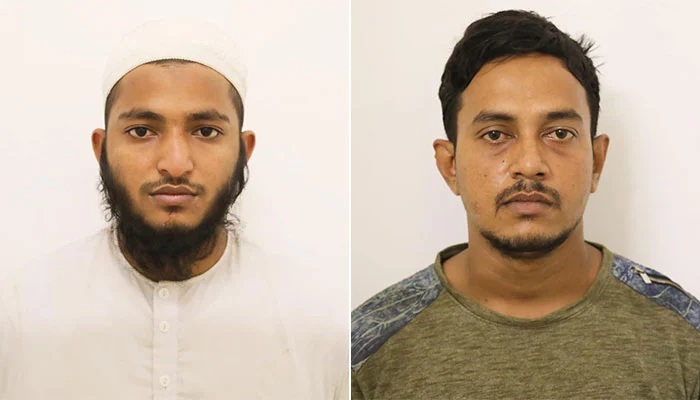 Driver and helper of a minibus, belonging to ‘Raida Paribahan’ have been arrested by Rapid Action Battalion (RAB) in connection with the death of 10-year old Mariam near Pragati Sarani in Dhaka.

It was stated by RAB’s Legal and Media Wing director Commander Khondker Al Moin while addressing a press conference at the RAB’s media centre at Kawran Bazar in the capital on Saturday.

Raju Mia is the son of Hossain Mia of village Tulakandi of Shimulkandi at Bhairab in Kishoreganj district, while Imran is the son of Sohrab Hossain of Boubazar area under Shyampur Police Station in Dhaka.

On November 9 last, Mariam’s body was found lying on the roadside at Pragati Sarani area in the capital. The girl’s father filed a case with Bhatara Police Station in connection with the death of her daughter.

It was told at the press conference that the arrested driver and helper confessed their involvement in the death of the girl-child under preliminary interrogation.

The RAB said driver Raju Mia and helper Imran Hossain left Postogola for Diabari with their minibus (Dhaka Metro Ba-14-9022), belonging to ‘Raida Paribahan,’ in the early morning on November 9 like every day. When the bus reached near Jamuna Future Park, Mariam got on board the vehicle with a file to beg alms from passengers. As the bus started moving, helper Imran asked driver Raju to drop the girl slowing the speed of vehicle. The girl was also asked to go to the door. At that time, being irritated, the driver slowed the speed of his bus somewhat and asked the girl to get down. When Mariam was about to get down, driver Raju accelerated the speed of the minibus suddenly. Being unable to withstand the force of sudden speed, the child fell right on the road from the bus doors.

RAB’s Legal and Media Wing director Commander Khondker Al Moin said Mariam died after she was dropped from ‘Raida Paribahan’ bus in front of Jamuna Future Park in the morning on November 9. At that time, her father learnt that body of a girl child was found at Bhatara area. In the afternoon of that day, he identified the body of her daughter. Later, he filed a case with Bhatara Police Station accusing an unknown driver.

Later, RAB started investigating the case. Apart from collecting over 50 CCTV footage, they talked to eyewitnesses. Then the RAB unearthed the mystery shrouded over the girl’s death.

Khondker Al Moin also said Mariam used to live with her parents at Kuratoli area in Khilkhet. Her father Rony is a private car driver. Mariam was admitted to Class I at a local school in 2019. However, she couldn’t continue her study due to lack of money. Later, she started roaming at Kuril and adjoining areas for financial assistance. On November 9, Mariam got out of their house in the morning and started seeking alms from pedestrians and commuters roaming on the footpaths.

Replying to another question, the RAB official said the vehicle was a ‘gate-lock’ service bus. So, the contractor-cum-helper put pressure on her to get down from the bus hurriedly. When the girl got down from the bus, its speed was 40km per hour. As a result, she died on the spot after falling from the bus.