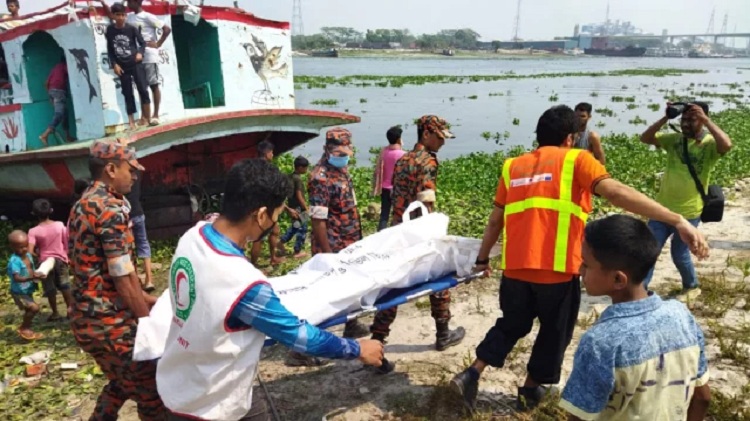 ‘ML Afsar Uddin’, which capsized in the Shitalakhya river at Char Sayedpur in Narayanganj on Sunday afternoon, has been salvaged.

Rescue ship ‘Pratyay’ of Bangladesh Inland Water Transport Authority (BIWTA) lifted the launch at about 5:35am on Monday. No bodies were found inside the launch, said Fire Service and Civil Defence personnel.

However, the divers recovered one more body from in front of Shah Cement Factory in Muktapur around 10:30am. Later, body of Umme Khairun Fatima, 40, head mistress of Harian Primary School of Sonargaon, was recovered from the river at about 1:20pm.

With them, the death toll from the launch capsize rose to eight.

He said, “Our two units are still working in search of the missing people.”

Fifteen passengers have been rescued but 17 are still missing. The launch master Billal Hossain, 45, is also missing.

It is learnt that four passengers are still missing from the launch capsize incident. They are Abdullah Al Jaber Adnan, 32, of Demra, Moslem Uddin Hatem, 55, an unknown passenger, and Jobayer Hossain of Munshiganj are confirmed missing.

The accident happened near under-construction ‘Nasim Osman Bridge’ at Koylaghat in between Al Amin Nagar and Char Syedpur under Bandar police station at about 2:30pm on Sunday.

Witnesses said the passenger launch ‘ML Afsar Uddin,’ which left Narayanganj launch ghat at about 1:58pm, capsized in the river Shitalakhya being rammed by a cargo vessel ‘MV Ruposhi-9’ at about 2:30pm.

The rescue vessel ‘Pratyay’ started its rescue operation from 11:00pm on Sunday.

However, sources at Narayanganj Fire Service and Civil Defence said there were maximum 35 to 40 passengers on board the launch. Except, about four passengers, no one has so far reported about any missing person.

The Shipping Ministry, the Shipping Department and the deputy commissioner of Narayanganj have formed three separate probe committees.