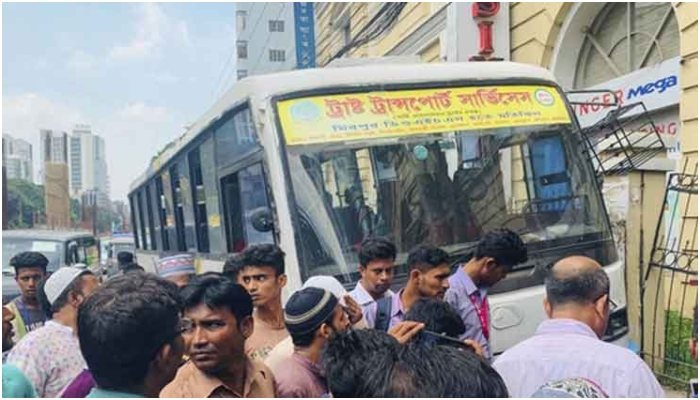 A woman was killed and her two daughters were injured when a passenger bus hit their autorickshaw at Mirpur-14 under Bhasantek Police Station in the capital on Tuesday (March 29) morning.

The 31-year-old Sabina Yasmin succumbed to her injuries and her two daughters — Ohi, 10, and Rahi, 8 –were injured.

The accident happened in front of Dental Hospital at Section 14 of Mirpur at about 11:30pm when the mother was returning home with her two daughters from their school.

Deceased Sabina Yasmin’s brother Mamun told reporters: “My two nieces are the students of local BN (Bangladesh Navy) School. My sister Sabina got on board a battery-operated rickshaw from in front of Dental Hospital at Section-14 Mirpur with her two daughters to take them to her residence. At that time, a speedy passenger bus belonging to Trust Transport Services of Army Welfare Trust, rammed the autorickshaw from the rear side. Being his by the bus, my sister was badly injured and fell on the road. She was first rushed to a local hospital. As her condition deteriorated, she was rushed to the DMCH where a doctor declared her dead.”

Mamun said deceased Sabina lived on the first floor of the House-B-37 of BRB Colony. She hailed from Sadar police station in Bogura district.