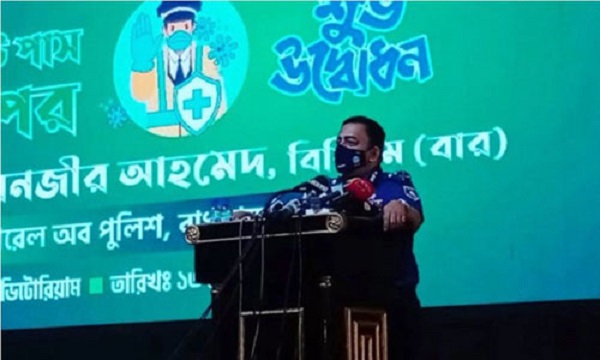 Inspector General of Police (IGP) Benazir Ahmed has said that movement pass is not a legal issue, it is cooperation from police to the country’s citizens.

“It is not mandatory to take a movement pass. We are not forcing anyone, neither there is any legal issue here. But, if anyone comes outside without the pass, must face police interrogation,” he said.

He said this while inaugurating the ‘Movement Pass’ app at Rajarbagh Police Lines on Tuesday.

The police boss urged all not to come out of home without emergency to strictly implement the lockdown in view of containing the spread of coronavirus.

“Don’t want to see anybody outside from April 14. If anybody needs to go outside because of urgency, should have to wear mask. Sanitize yourself soon after entering houses so that none of your near and dear one get infected through you,” he said.

“We will curb the second wave like we did last year. But we need to stop unnecessary movement,” he added.

He also said that journalists do not need movement pass for travel during the week-long nationwide strict lockdown imposed by the government.

“Bangladesh police initiated movement pass for those who have urgency to go out of home. Movement pass is required for official travel or in emergency need. But, journalists do not need the pass,” said the police boss.

Replying to questions from journalists about how marginalised people, who have no internet access or smartphones, will collect the pass, the IGP said, “About seven crore people in the country use internet. If no one from the marginalised population can, they can take their neighbours’ the help. Besides, we’ll get daily feedback from the media.”

People can get the pass through an app by visiting: movementpass.police.gov.bd