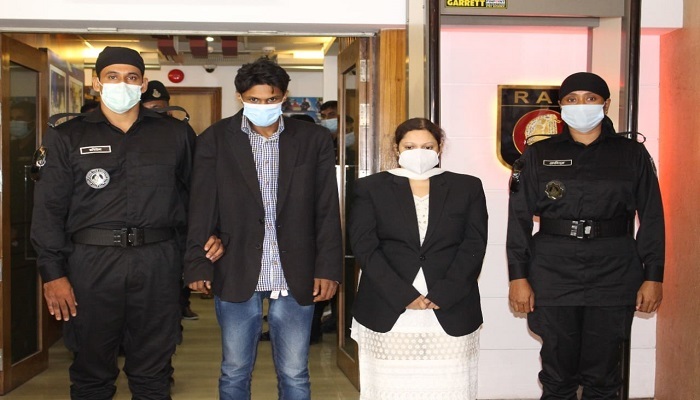 Arrested so-called scientist, researcher and specialist doctor Ishrat Rafique Eshita and her associate Didar have been placed on a six-day remand each in two cases.

Earlier, police produced both the arrested persons to the court and sought five days’ remand each in fraud case and drug case.

But, after hearing the petitions, the court placed them on three days remand in each case.

The so-called medical doctor and researcher Ishrat Rafique Eshita and her accomplice Shahidul Islam Didar were arrested by RAB during a drive at about 9:30am on Sunday at a house at 481,2/a, North Ibrahimpur, Mirpur 13, Dhaka.

Arrested Ishrat Rafique Eshita is a medical doctor by profession. She used to introduce herself as a discussant, medical scientist, researcher, PhD holder, human rights activist, organiser, Brigadier General etc. Eshita also used to claim that she held important posts at different international organisations. In fact, she has no other degree except an MBBS from a private medical college. But, she had put all the higher degrees of medical science beside her name. ‘globaljournals.org’ website shows Eshita claims her qualifications as MBBS (CBMC,B), MPH (BSMMU), MD,DO (Hyperbaric Medicine, ACHM,USA); Medical Scientist & Researcher, PhD candidate.