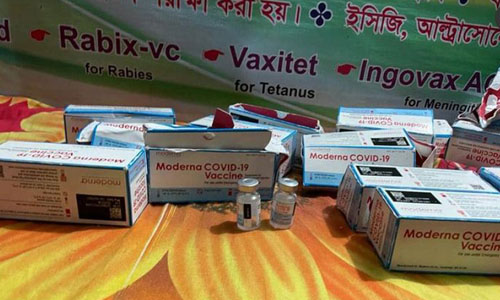 Police have arrested a clinic owner along with two vials of Moderna’s Covid-19 Vaccine and few empty packets of the vaccine from city’s Dakhshinkhan area.

Two people were seen taking vaccine during the raid, he added.

After filing of a case, police produced Bijoy Krishna before a court and sought 10 days remand for him.

During initial interrogation, Bijoy Krishan informed that he received Tk 1,000 for per dose vaccine.

“We have to know that Bijoy Krishna gave vaccine to how many people in exchange of money and from where he collected the vaccine ampules. For that reason we sought 10 days’ remand to interrogate him,” said the inspector.