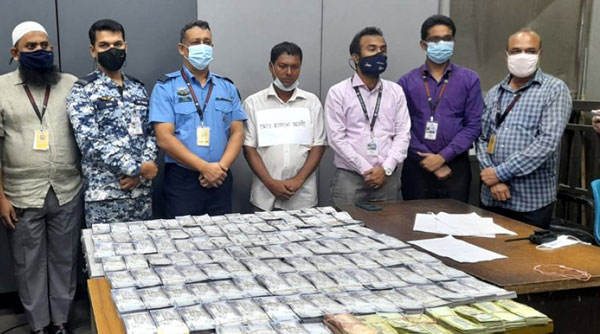 Customs officials have seized foreign currencies worth around Tk 12.5 crore from a cargo village in Hazrat Shahjalal International Airport in the capital.

A man named Hasan Ali was detained by the officials in connection with the incident.

Around 54.75 lakh Saudi riyals and 20,200 Singapore dollars were seized from a Singapore-bound carton at about 8:20pm on Monday.

Gazi Qayyum, a member of Members of Aviation Security (Avsec), said they found the cartoon during a security scan at the export cargo village.

The currencies were being smuggled to abroad on a Singapore Airlines flight and those were found from shipments on the Star Express line, a freighter company.

After counting, the executive director said there were 54 lakh and 75 thousand Saudi riyals and 20 thousand 200 Singapore dollars.