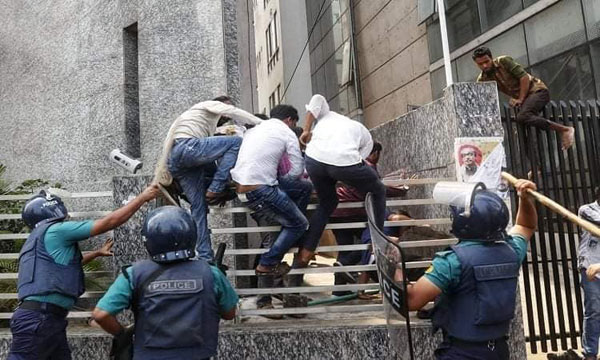 A clash ensued between the BNP men and police personnel at Nayapaltan in the capital on Tuesday while the party activists brought out a protest procession against communal violence across the country.

The BNP leaders and activist started gathering in front of the party office from 10am to join their pre-scheduled programme.

There, they held a rally. After that, they brought out a protest procession at about 11:40am. But the law enforcers barred them when it reached Nightingale.

At one stage, the party men threw brick chips on the policemen which forced the law enforcers to fire tear gas shells.

A panic gripped the area and the surroundings following the clash.

An on-duty police official said the BNP men brought out the procession just after ending the party Secretary General Mirza Fakhrul Islam Alamgir’s speech. He asked the party activists not to bring out procession. But they did not hear.