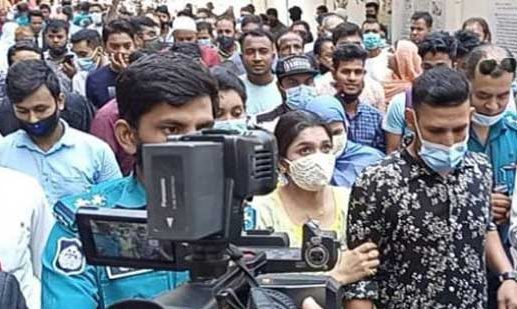 Dhaka Metropolitan Magistrate Mohammad Jasim passed the order after a hearing was held following their surrender before the court seeking bail.

The other accused in the case is Tamima’s mother Sumi Akter.

Earlier on Sunday morning, the trio surrendered to the court seeking bail.

On September 30, the court issued a summon against the three. The same day, the case investigation officer Police Bureau of Investigation (PBI) submitted a report terming the couple’s marriage “illegal”.

Tamima did not divorce her first husband Rakib. Rakib did not get any legal notice on the issue. Moreover, Instead, Tamima made a fake divorce notice and published it in different media outlets.

She is still Rakib’s wife, and marrying anyone without divorcing her current husband is illegal and it is a punishable offence, the report said.

Previously, the court instructed PBI to investigate the matter after Rakib Hasan filed a case on February 24.

As per the Muslim law, it is a crime and punishable to marry someone before divorcing the first husband.

In such a situation, cricketer Nasir Hossain and Tamima Sultana Tammi’s marriage was illegal, the report concluded.