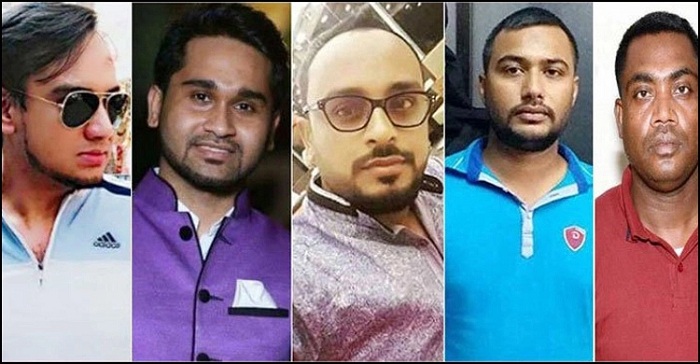 All the five accused, including Apan Jewellers owner Dilder Ahmed Selim’s son Shafat Ahmed, have been acquitted in a case filed for rape of two private university students at Raintree Hotel at Banani in the capital.

Begum Mosammat Kamrunnahar, judge of the Women and Children Repression Prevention Tribunal-7 of Dhaka, delivered the verdict on Thursday in presence of the accused as the charges brought against them were not proved.

Before delivering the verdict, all the accused were brought at the court at about 9:00am. They were first kept at the prison cell of Chief Metropolitan Magistrate court. Later, they were put on the dock at about 12:30pm. After a lengthy observation on the verdict, the judge pronounced her judgement at about 2:50pm.

Some 50 policemen were deployed at the court premises as additional security measures to deliver the verdict,

Two private university students were allegedly raped at gunpoint at a birthday party from 9:00pm on March 28, 2017 to 10:00am on the following day at the Raintree Hotel.

Later on May 6, 2017, a rape case was filed against five persons including Safat with Banani Police Station.

After investigation, Ismat Ara Amy, investigation officer (IO) of the case and inspector of the Women Support and Investigation Division of police, submitted chargesheet against the accused to the tribunal on June 7, 2017.

In the chargesheet, charges of rape were brought against accused Shafat Ahmed, Nayeem Ashraf alias HM Halim under Section 9 (1) of the Women and Children Repression Prevention Act. Charges of abetting others in committing rape were brought against the rest three accused–Shadman Sakif, Rahmat Ali and Billal Hossain under Section 30 of the same act.