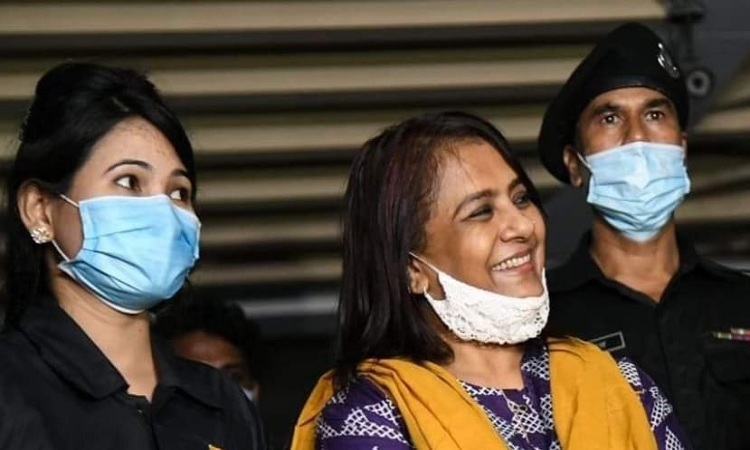 A court in Dhaka has granted bail to expelled Awami League leader and businesswoman Helena Jahangir in all four cases filed against her.

under the Digital Security Act (DSA) with Gulshan police station.

Dhaka’s Additional Chief Metropolitan Magistrate Abu Bakar Siddique granted her the bail on a bail bond of Tk 10,000 on Wednesday.

“Now, she can walk out of jail once the bail orders reach the jail authorities,” her counsel AHM Shafiqul Islam Molla stated it to newsmen.

Earlier on September 21, Helena Jahangir got bail in two cases filed on charges of fraud and possession of drugs. She secured bail in the other case filed under the Telecommunication Act on August 17.

Helena Jahangir lost her membership of the Awami League subcommittee on Women Affairs on July 25 over her involvement with the Awami Chakrijibi League, an organization with no affiliation with the ruling party.

She was also removed from the position of advisor of the Awami League’s Comilla district unit.

Rapid Action Battalion arrested her during a raid at her Gulshan-2 residence in the capital at about 8:00pm on on July 29.

During the raid, RAB had seized a huge quantity of liquor, deer skin, poker equipment, walkie-talkies, foreign currencies, and knives from there.

After her arrest, RAB also raided the offices of IP television Joyjatra and sealed it off.

She is also accused of spreading false information, extortion, and other illegal activities, say police.

On August 18, Helena Jahangir gave confessional statements in two cases filed with Gulshan police station — one under the Wildlife Protection Act and another under the Special Powers Act.

Helena confessed to RAB that she owned at least five garments in Narayanganj and has 17 flats in Uttara, Mirpur and Gulshan areas of the capital.

She is a director of Federation of Bangladesh Chambers of Commerce and Industries (FBCCI), and affiliated with at least seven organizations and over a dozen clubs. Her husband was a garments employee in 1990.