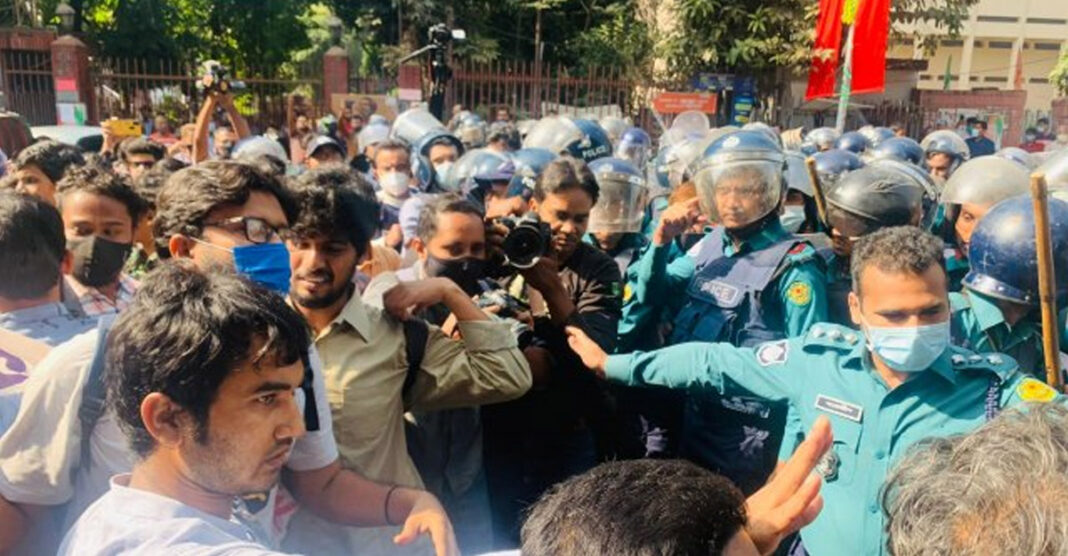 Police on Monday foiled an attempt of eight left-leaning student organisations to block Shahbagh intersection to press home their various demands, including half fare on public transport for students.

Their other demands include government steps to control the abnormal price hike of daily essentials and reduce fuel prices.

The leaders and activists of the left-leaning organizations brought out a procession from Dhaka University’s TSC area at noon, said Moudud Hawladar, officer-in-charge of Shahbagh Police Station.

When their procession got close to the National Museum, police obstructed them, leading to a scuffle between the students and police. Police later dispersed the protesters.

They also demanded the withdrawal of the increased fare of public transport, stopping the sitting service system, half fare for students and workers of different industries, issuance of a gazette notification over the half pass for students, ensuring justice over the death of Notre Dame College student Naeem Hasan and road safety.

The students have been staging demonstrations since November 18 demanding half fare in public transport for students.

The recent hike in transport fares following the rise in fuel prices and the death of a Notre Dame College student in a road accident caused by a Dhaka South City Corporation (DSCC) vehicle prompted the students to raise their voice against chaos in the transport sector.

They also claimed that no one has paid any heed to their demand though the students have been harassed in public buses.

The death of Notre Dame College student Naeem Hasan, who was killed in an accident in Gulistan area of the city on November 24, triggered the movement.

On November 20, students from two colleges vandalised 10-12 buses in Science Laboratory area demanding half fare in the city for students.

On November 18, hundreds of students of Dhaka College demonstrated outside their college to press home the same demand.

The government on November 3 raised the prices of diesel and kerosene by Tk 15 per liter and the Bangladesh Road Transport Authority (BRTA) increased the fares for intra-city and inter-district buses by 26.5% and 27% respectively following an indefinite strike by transport owners on November 7.