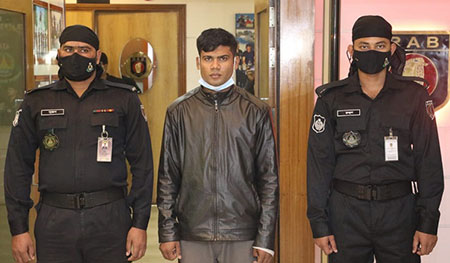 Ashiqul Islam Ashique, the prime accused in the case of gang raping a female tourist in Cox’s Bazar, and his associates assaulted the woman after they failed to extort Tk 50,000 from her, Rapid Action Battalion said on Monday.

According to a RAB media release, Ashique, is the mastermind of an organised criminal gang of 30-35 members in the seafront resort town of Cox’s Bazar.

Earlier, a team of RAB arrested Ashique, 29, from in Madaripur district on his way to Patuakhali from Dhaka, said Commander Khandaker Al Moin, director of the elite force’s Legal and Media Wing.

The intelligence branch of Rab headquarters, Rab-8 and Rab-15 conducted an operation in the area of Mostafapur bus stand in Madaripur on Sunday night to nab Ashique, the release said.

Moin said Ashique and his associates have been involved in crimes like theft, robbery, kidnap, extortion and drug peddling in Cox’s Bazar since 2012.

Ashique was first arrested in 2014 for possessing illegal arms.

He used to blackmail tourists in collusion with the managers of different hotels, the release added.

In this latest incident on December 21 Ashique and associates committed the crime as the woman and her family refused to pay them Tk 50,000 demanded as extortion money.

Then Ahique and his men abducted the woman from Laboni point of the Beach area and took her Zia Guest Inn Hotel, where she was sexually attacked.

Besides, the woman along with her husband and child went to Cox’s Bazar few days ago. They family needed Tk 10 lakh for the child’s treatment. According to RAB release the family went there for collecting donation from the rich people for the treatment.

According to the police, there are 12 previous cases against Ashique, including assault on women, possession of drugs and illegal arms.

Police said the individuals arrested earlier today were found to be involved in the crime indirectly during investigation.

However two other prime accused in the case Esrafil Huda Joy and Mehedi Hasan Babu are still absconding. There are two police cases against Joy, said Additional DIG of Tourist Police of Chattogram Division Mohammad Moslemuddin.

Earlier on Saturday, Riaz Uddin Chhotan, manager of a hotel that was one of two locations where the woman was raped, was arrested and remanded for four days.

With Ashiq, five people have been arrested in the case.

The 22-year-old woman checked into a Cox’s Bazar hotel on Wednesday morning with her husband and their eight-month-old baby.

In the afternoon, the family went out for a stroll on the sea beach. At Laboni point, the husband had an altercation with one of the accused – thought to be Ashiq, who has an extensive criminal record and only got out of his last stint in jail 2 weeks ago -after they accidentally bumped into each other.

What started as a small argument soon snowballed into a major altercation and the young man called his accomplices to the spot. Later in the day they kidnapped the family in two auto-rickshaws and took them to a desolate place near the golf club where three of them allegedly violated the woman.

Her ordeal did not end there. The woman was taken to Zia Guest Inn, of which arrested manager Riaz Uddin was a friend of Ashiq’s, and there the three accused again took turns to rape her for hours. They released her in the early hours of Thursday and allegedly threatened to kill her family if she narrated her ordeal to anyone.

Lieutenant Colonel Khairul Islam Sarkar, commanding officer of Rab-15, said their team rushed to the family’s rescue soon after they got the call from the woman. Earlier calls to 999 proved futile.