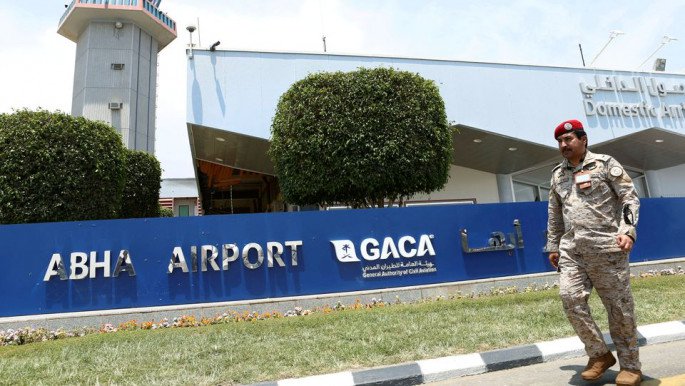 Twelve people, including Bangladeshis, were injured by falling debris on Thursday when the Saudi military blew up a Yemeni rebel drone targeting an airport close to the border, officials said.

Fragments fell to the ground after the interception of the drone over Abha International Airport, which has previously been targeted in similar assaults by the Iran-backed insurgents.

The Houthis claimed responsibility for the attack in a tweet, saying they had targeted an airport “used for military action against Yemen” and warning citizens to “stay away” from such sites, reports AFP.

The Houthis, fighting a Saudi-led coalition since 2015, have frequently launched drone attacks at targets in the kingdom including airports and oil installations.

In recent weeks, they have also launched deadly cross-border attacks for the first time against fellow coalition member the United Arab Emirates, after suffering a series of battlefield defeats at the hands of UAE-trained pro-government forces.

The SPA said “12 civilians” were injured when the unmanned aircraft was intercepted, including citizens of Bangladesh, India, Nepal, the Philippines and Sri Lanka, as well as two Saudis.

In response, the Saudi-led coalition said it would strike positions from which the Houthis launch drones in Sanaa, the rebel-held capital of Yemen.

“We ask civilians in Sanaa to evacuate civilian sites used for military purposes for the next 72 hours,” it said, quoted by SPA.

“As a result of the interception process, some shrapnel of the drone was scattered after its interception inside the internal perimeter of the airport,” coalition spokesman Brigadier General Turki al-Maliki told SPA.

He said Abha’s was a “civilian airport that is protected under international humanitarian law” and accused the rebels of a “war crime”.

The White House said President Joe Biden reaffirmed in a phone call on Wednesday with Saudi King Salman the “US commitment to support Saudi Arabia in the defence of its people and territory” from Houthi attacks.

Abha is located in the kingdom’s southwestern mountains and is popular, particularly during summer, with Saudis and expatriates desperate to escape the scorching heat.

Border provinces of Saudi Arabia have come under frequent drone or missile attacks by the rebels, in what the Houthis say is retaliation for a deadly bombing campaign carried out by coalition aircraft against rebel-held areas.

Most have been safely intercepted by Saudi air defences, but in late December an attack on Jizan province on the Red Sea coast saw two people killed and seven wounded.

In December, the coalition said the Houthis had fired more than 400 ballistic missiles and launched over 850 attack drones at Saudi Arabia in the past seven years, killing a total of 59 civilians.

The UAE has also been on alert since a drone and missile attack killed three oil workers in Abu Dhabi on January 17.