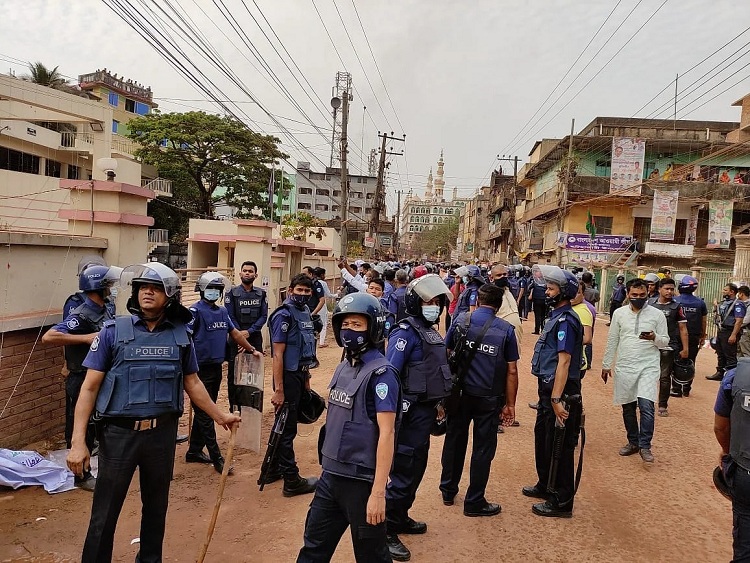 Four people, including three Hefazat-e-Islam Bangladesh activists, were killed and dozens injured in a clash between police and the demonstrators at Hathazari in Chattogram on Friday protesting the visit of Indian Prime Minister Narendra Modi in Bangladesh, said police.

It was learnt that the Hefazat-e-Islam activists, mostly students of Hathazari Madrasa brought out a protest procession after Jumma prayers protesting the attack on people at Baitul Mukarram National Mosque in Dhaka and the visit of Modi.

During the time, clash occurred between the protesters and police, leaving dozens of people injured.

The injured were taken to the CMCH where the four died, said police.

However, police claimed that the protesters threw pickets to the Hathazari Police Station. Police fired blank shots to dispatch them, leaving several injured.

Meanwhile, the madrasa students blocked the road in front of the madrasa protesting the attack. Consequently, vehicular movement on the Hathazari-Najirhat road come to a halt.

Hefazat-e-Islam Bangladesh organising secretary Azizul Huque Islamabadi said the Hathazari Madrasa students brought out a procession hearing the news of an attack on demonstrators at Baitul Mukarram Mosque in Dhaka. Police tried to obstruct their procession and at one stage, they fired gunshot targetting the students, which resulted in a clash. At least, 20 people including four newsmen were injured in the clash.