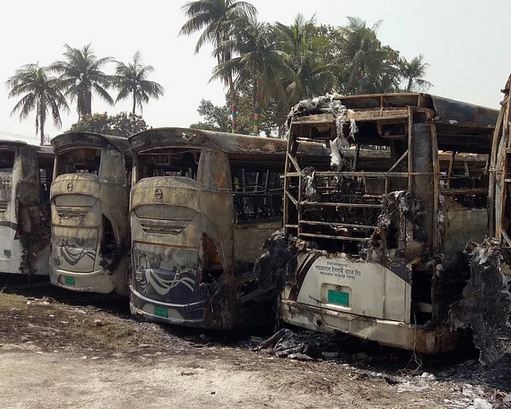 At least 12 buses, owned by expelled Awami League leader Sajjad Hossain Barkat and his brother Imtiaz Hossain Rubel, were set on fire by unidentified miscreants at a terminal in Faridpur district town at early hours on Saturday.

The Anti-Corruption Commission (ACC) seized 22 buses in June 2020 following a court order after Barkat and Rubel were arrested in a money laundering case. After that, those buses had been kept at the terminal.

A gang of assailants set the 12 buses of ‘South Line’ Paribahan on fire at the terminal in Goalchamte around 1.30am on Saturday, said superintendent of Faridpur police Md Alimuzzaman.

Being informed, fire fighting units were rushed to the spot and distinguished the blaze.

Shipul Ahmed, assistant director of Faridpur Fire Service and Civil Defense, said, “A probe is on to unearth the origin of the fire.”

On March 3 last year, the CID filed a chargesheet against 10 people, including Barkat and Rubel, in a Tk 2,000 crore money laundering case.