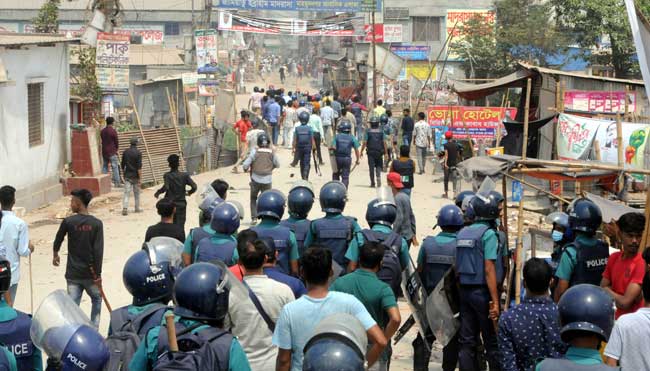 A dawn-to-dusk hartal enforced by Hefazat-e-Islam Bangladesh is underway on Sunday.

The organisation called the strike on Friday night protesting attack and killing of its activists in Dhaka, Chattogram and Brahmanbaria.

In support of the hartal, the picketers blocked Dhaka-Chattogram highway by setting fire to tyres at different points of the road. They are staging demonstration there.

Witnesses said the activists of the Hefazat equipped with sticks started gathering at Mouchak area in Narayanganj’s Siddhirganj from the morning.

They set fire on tyres, bamboos, benches on roads.

Police are trying to remove them from the highway till filing of this report at 9:40am.

The Hefajat men brought out processions in Baitul Mukarram, Lalbagh, Mohammadpur and Jatrabari areas this morning.

The party leaders and activists have took position on different roads in the capital.

They also blocked a road in Basila area of Mohammadpur in the morning.

Vehicular movement was seen low on the streets in the capital.

Law enforcement agencies are on alert position in the field centering the hartal.