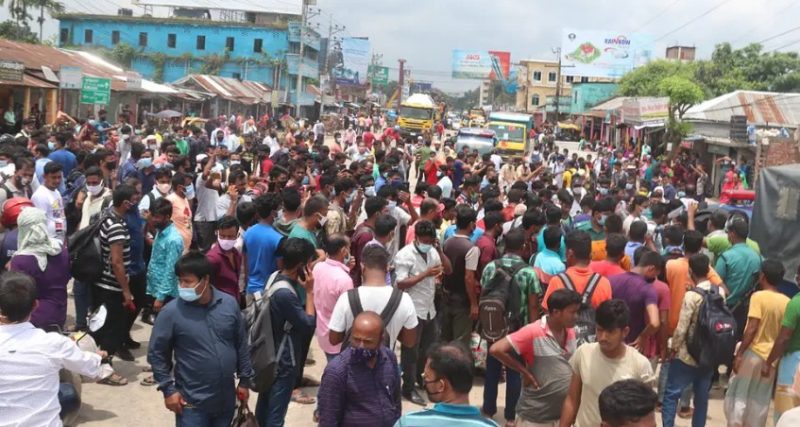 Hundreds of garment workers are staging protest by blocking the Dhaka-Rangpur highway in Rangpur city demanding transportation facility to back in Dhaka. They started protesting by blocking the highway in Moderna intersection area on Saturday from morning till noon. Traffic on the highway is closed due to the blockade.

These agitating workers work in different garment factories in Dhaka and they have to go to the city for joining work. Of them, some left the city for Dhaka in freight and empty trucks in the morning. But as the day progresses, people continue to grow. Eventually the police came and stopped the movement of these vehicles. Hundreds of men and women, who later left for Dhaka, blocked the highway and started protesting.

Sumi Begum, who came here from Burirhat area of Rangpur to go to Dhaka, said she worked at AKS Group Garment Factory in Dhaka and she has to go to Dhaka because of her job.

“I am trying to go to Dhaka every day but could not go due to transportation problems. Many people of our team have gone to Dhaka. Then why cannot we go? I have been standing on the highway since this morning,” she added.

Hundreds of people are waiting for cars, as seen in the Moderna intersection area of the city. Because of the hot sun, some are sitting under the trees, some in the shop sheds and most of them are garment workers. Some people have already left since morning.

According to witnesses, when people started to increase after 11 pm, the police obstructed the movement of vehicles. In such a situation, they started protesting by blocking the highway. Their only demand is that they have to make arrangements to go to Dhaka because of their job.

Sharmin Akhter works at ABS Garment Factory in Savar. She said, “It will be very difficult if I cannot go to Dhaka. I have to go anyway. There is a fear of losing the job. What do I do then?”

Some agitating workers said all the garment factories were closed with the announcement of a 15-day lockdown and the workers came to their homes following this decision. But suddenly the announcement comes on Friday that the factory is open from Sunday. Such a decision should not have been made without arranging for the transport of workers to Dhaka. Now how do we go to work in Dhaka?

“The factory should have been opened after the resume of bus-train services. Those who made such a decision did not even think about the workers.”

Officer-in-charge (OC) of Tajhat Police Station Akhtaruzzaman Pradhan said, “Efforts are being made to control the situation and we are talking with garment workers. People from eight districts of the division have to travel through the Moderna intersection. All kinds of communication on the highway stopped as the workers blocked the highway.”

“We are trying to lift the blockade from the highway and additional police have been deployed at the scene,” he added.