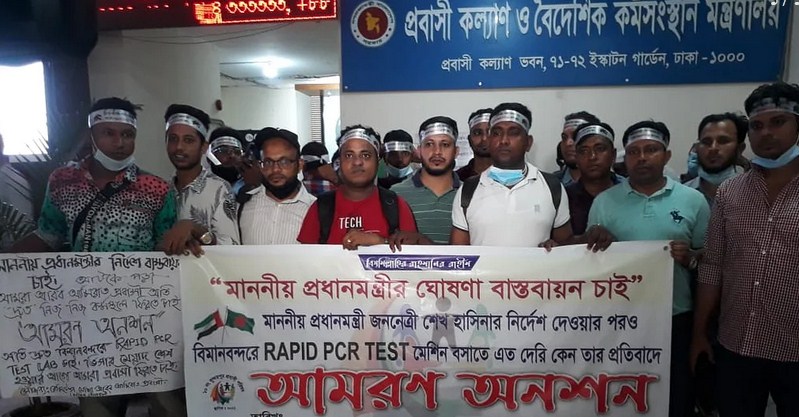 Expatriates have started a hunger strike demanding the rapid setting up of RT-PCR laboratories for Covid-19 test at international airports in the country.

The expatriates started the programme under the Ministry of Expatriates’ Welfare and Overseas Employment building in Dhaka on Tuesday. More than a hundred of expatriates took part in the programme and they chanted slogans in favor of their demands from below the ministry.

Expatriates who took part in the programme said that coronavirus infection is decreasing in the world and the situation has started to return to normal. Different countries have relaxed restrictions. None of the country’s international airports has a RT-PCR laboratory. Because of this they cannot go to work.

Expatriates have been demanding the establishment of Rapid RT-PCR laboratories in the country’s international airports for a long time.

The expatriates said that the work of setting up a laboratory at the airport did not start even after a week after the cabinet directive. Due to this many expatriates are in danger of not being able to return to work.

Mirpur resident Sajjad Hossain, who took part in the programme, said he has been working in Dubai for 10 years. His organization has repeatedly asked him to join the work. But he is not able to go as there is no RT-PCR laboratory at any airport in the country.

Shafiqul Islam of Pakundia upazila in Kishoreganj, who took part in the programme, said he has been working in Dubai for 13 years. He came to the country on holiday. Now the employer is repeatedly asking him to join the work. But he can’t go.

According to the Ministry of Expatriates’ Welfare and Overseas Employment, it has not been finalized yet which institution will set up the laboratory at the airport. It takes time to choose which organization will be given the job.

The expatriates who took part in the programme said they would continue their hunger strike until the cabinet directive is being implemented. They want to know at least a specific date from the ministry for setting up the laboratory.