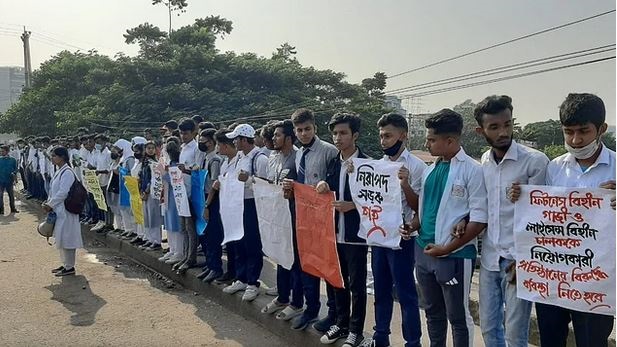 Agitating students were gathered again to stage their demonstration in city’s Rampura area on Thursday noon after police had foiled their programme earlier, demanding the road safety.

About 20-25 students tried to form a human chain on Rampura Bridge 12 noon but they had to left the venue as police obstructed them.

At around 2.15 pm, a procession of more than a hundred students from Rampura Bazar gathered on the bridge and started chanting slogans like “We want safe roads,” “Movement cannot be stopped with police” in protest of the police obstruction.

The students observed two minutes silence in memory of the victims of the road accident. This time the police did not obstruct them.

Sohagi Samia, a student of Khilgaon Model College, said, “We wanted to form a human chain in limited scale. But we were not allowed to stand. We saved more strength and returned with the procession.”

“Our programme could not be foiled. We would not be stopped by cases.”

The agitating students said their movement could not be stopped by threats or intimidation. They want peaceful movement.

“The movement will continue till the demands are met. The students said that no student was involved in the sabotage,” they added.

Meanwhile, on Friday at 10 am, the agitating students will again form a human chain on the Rampura Bridge.

Nurul Amin, ADC of Khilgaon division (Motijheel zone), said, “Few students gathered in the morning. We checked their ID cards and removed them.”

He further said, “There are divisions among the protesters and outsiders are intruding among them. That’s why we are aware of who comes and stands.”

They will not be given scope to create any chaos as the government has promised to meet their demands, said Nurul.