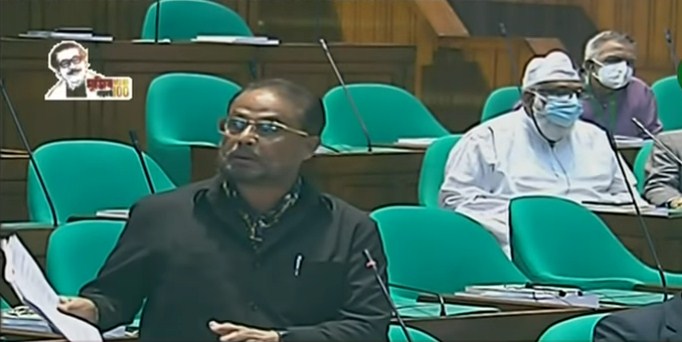 Deputy Opposition Leader Ghulam Muhammed Quader said in parliament on Monday that there is uncertainly and a lack of clarity over the government’s plan to procure Covid-19 vaccine.

“But we still don’t know for sure when and where we will get vaccines…. We’re just hearing the words of hope over vaccines ,” he said while participating in the discussion over the supplementary budget of 2020-21 fiscal in the House, reports UNB.

GM Quader, also the chairman of Jatiya Party, said the finance minister in his budget speech mentioned that the government took measures to bring some 80 per cent of population in Bangladesh under the vaccination coverage and some 25 lakh shots will be given a month.

“If so, three crore doses of vaccines can be given in a year. And then it would take 5 years in case of giving one-dose vaccine and 10 years in case of two doses to each person for bringing 80 per cent of the population under the inoculation coverage,” he said.

The JP leader sought an answer from the finance minister over what would be the condition of the country’s economy, lives and livelihood, if it takes 5-10 years to complete the vaccination programme to ensure herd immunity in the country.

“But we live in uncertainty over the corona vaccines. The finance minister should make a statement in Parliament where vaccines will come from,” he said.

Talking about the proposed national budget, he said there is no plan to generate employment for the lower-class and middle-class people, rather there is a proposal to reduce corporate tax to satisfy the rich and make them richer.

“We definitely want a business and industry-friendly budget. But we simultaneously require specific economic plans for development of the economic condition of the people from the low and middle classes, which remain missing in this budget,” said GM Quader.

“We should have allocated at least 2 per cent of GDP for the health sector during this corona pandemic,” said the deputy opposition leader, adding that the country’s economy would be vibrant again, if the corona can be checked.

Even the fund allocated for the health sector is being misused due to corruption. But none get punished for irregularities, he said.

Referring to journalist Rozina Islam’s recent arrest GM Quader said a journalist was harassed and tortured few days ago and a case was filed against her. Now rumour also spreads that a sedition charge would be brought against her.

He said the journalists should be allowed to carry out their responsibility, which will help curb corruption.

Turning to education, the JP Chairman said around 4 crore students can’t go to their schools and colleges for a long time. If the Covid pandemic lasts for five more years, Bangladesh will head towards having an illiterate generation, he said.