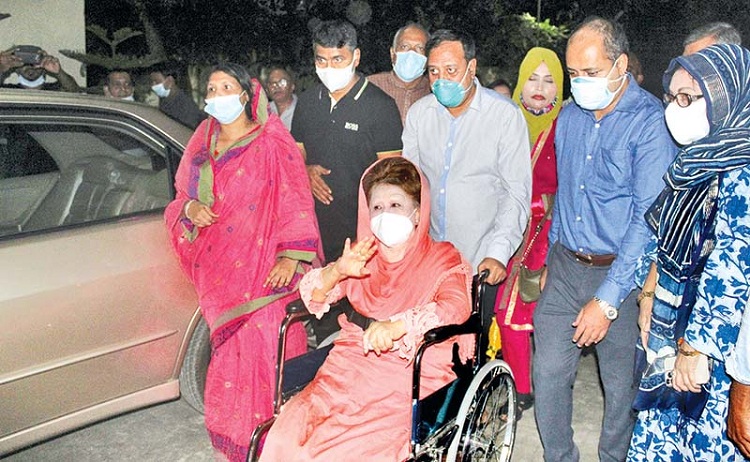 BNP Chairperson Begum Khaleda Zia’s jail sentence suspension is likely to be extended for another six months by the government.

The Ministry of Law on Wednesday (March 16) gave its opinion recommending extension of the suspension of her jail sentences in two graft cases for another six months following an appeal filed by the family members of the former premier.

On early Wednesday afternoon, Law Minister Anisul Huq told reporters at his ministry’s office in the secretariat that the opinion of his ministry on the appeal of Khaleda Zia’s family would be sent to the home ministry later in the day.

In this regard, the Law Minister said: “Khaleda Zia was not given bail. Bail is granted by court. What has been done is that her family submitted an application two to two and a half years ago seeking to relase her staying her jail sentence. No reference of law was mentioned there.

Anisul Huq said the government released the BNP chairperson after suspending her jail sentence as per Section 401 (1) of the Criminal Code of Procedure (CrPC). “It wasn’t a bail, rather it was just release from jail,” he said.

The Law Minister also said they (Khaleda Zia’s family) submitted another application seeking extension of the release of the BNP chief. “The application will come to me. We’ll give our opinion on it and send it to the Ministry of Home Affairs.”

The BNP chief landed in jail in February 2018 in the Zia Orphanage Trust corruption case. Later on October 30 that year, the High Court extended her punishment to 10 years after dismissing her appeal.

Convicted in two corruption cases, she was temporarily released by the government by an executive order considering her age and on humanitarian grounds amid the Covid-19 epidemic.

The former prime minister first came out of prison on March 25, 2020 after her jail sentence was suspended. The last six-month jail term suspension is set to end on March 24 this year.

In April this year, the 76-year-old BNP chief tested positive for Covid-19 and took treatment at home. Later, she was admitted to the Evercare Hospital. She tested negative for Covid-19 on May 8.