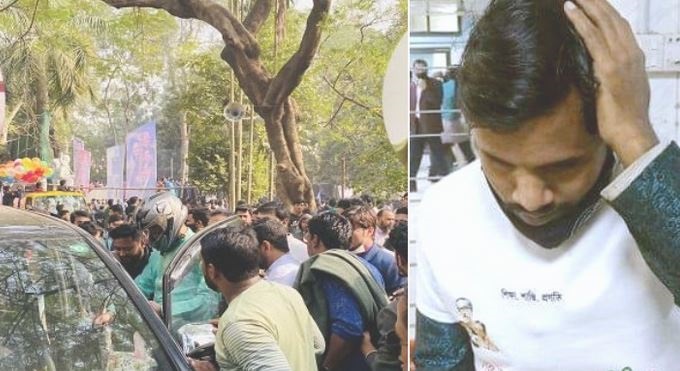 At least 13 people, including Bangladesh Chhatra League (BCL) general secretary Lekhak Bhattacharjee, were injured in a factional clash of the organization at Dhaka University, while observing its 74th founding anniversary.

The clash took place at around 1.45 pm at the base of Aparajeyo Bangla on the university campus.

Witnesses said supporters of Dhaka College and Dhaka University’s Kabi Jasim Uddin Hall units locked in an altercation over taking position in front of the stage. Later, they engaged in clash , started throwing chairs and bricks to each other ear the stage just before the start of the programme.

When BCL president Al Nahian Khan Joy and general secretary Lekhak went there to calm the situation, Lekhak was injured after being hit by a brick piece on his head.

Wishing anonymity a BCL activist said, “Two groups of Dhaka College and DU’s Kabi Jasim Uddin Hall units first engaged in an altercation over taking position in front of the programme venue, later, started pushing and throwing bricks to each other. At one point of the clash, after getting off the stage, a stone hit BCL secretary on the forehead. He was later removed from the programme venue after wearing a helmet.”

According to some sources, Lekhak’s head was stitched. Another 8-10 leaders and activists of Kabi Jasim Uddin Hall of Dhaka University were injured in the incident.